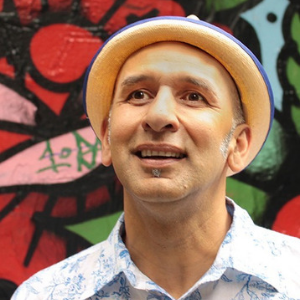 FRANKSTON’S IMAGE IS THE VISION WE BRING TO IT. Gilbert Rochecouste of Village Well

FOR Melbourne’s internationally famous “placemaker” Gilbert Rochecouste, being in Frankston on Tuesday 29 January as guest speaker at a public breakfast meeting was a return to his working roots.

Mr Rochecouste, founder of Village Well, said he started his “service career” under the guidance of Jacques and Liliane Mielle at their renowned Frankston restaurant Douce France (“Sweet France”) in the late 1970s. (By 1984 the Mielles had opened Douce France 2, also in Frankston, with their son Joel as chef.)
The career of Mr Rochecouste, who was born in multicultural Mauritius and grew up in Dandenong, was up and running, the start of a journey that would see him working as a young manager at Myer and later as general manager of Chadstone shopping centre and a key member of the team that made “Chaddy” the self-described “fashion capital of Melbourne”.

This and other successful “making of places” led to him founding Village Well, which has built an enviable reputation for helping town planners, governments, developers and other stakeholders create a people-centred approach to the planning, design and management of public spaces – placemaking.
Village Well is best known for creating blueprints to revive Melbourne’s inner-city laneways in the 1990s, rejuvenating the ailing industrial cities of Newcastle and Wollongong in NSW as well as work on Dark Mofo food and arts festival in Hobart, and Queen Vic Market’s night market.

This was what the breakfasters wanted to hear: successful urban revival stories from around Australia and overseas – because the reinvigoration of Frankston is happening now and members of the Committee for Greater Frankston and their guests are determined to maintain momentum started last year when state and federal governments as well as Peninsula Health and Monash University pledged more than $1 billion worth of infrastructure and investment in training and education.

“You need a good story for a place,” he said, “and Frankston has great DNA with its beach, compact CBD, proximity to food and wine businesses of the Mornington Peninsula”, and growing health and education sectors.

“Activation starts with people not just infrastructure and buildings. “Providing a sense of surprise and wonder is key.

“We’re seeing the start of a shift towards making places better for people. You need a public realm as an anchor; in Europe you have cities with a piazza, a public square or marketplace. Where is Frankston’s piazza?

“Here’s an idea – move car parks underground and build a place where two or three thousand people can gather; a heart where people can walk or just sit and socialise.” He said the best European seaside cities had “car parks on the edge of town” and people could walk or catch public transport to the centre.

“You need 10 great things to do in Frankston,” he said. “You need to ‘own’ the summer, perhaps with a night market, jazz on the foreshore.
“I see a seaside shopping centre, a mixed use development that blends residential, commercial, cultural, institutional and entertainment uses.” He said it was instructive that Australian shopping centre giant Westfield had sold its 45 shopping centres and airport retail precincts in the US, UK and Italy for almost $33 billion just over a year ago. “The future is mixed use.

“Pride in a place is crucial. You can change a city’s fabric.” He said it was essential that “locals love Frankston first”.

Mr Rochecouste said Village Well had produced economic strategies for 50 cities and one outstanding finding was that creating a night-time economy lifted sales across the board by at least 30 per cent. “This is a no-brainer for Frankston – summer and the seaside.” Referring to Hobart’s Dark Mofo food and wine, music and art festival, he said one sign of its success was that “women and children are seen out at night”.

“Pleasure is the greatest motivator. If a shopping centre is beautiful, people will spend 20 per cent more time there.” He said the wellness industry and Frankston’s education and medical precincts would be other drivers of change. “Frankston should aspire to be a second tier city.

Some of Mr Rochecouste’s ideas for urban revival (including some already in place elsewhere in the world) included a public food market in a city’s CBD, a train station that was also a botanic garden (Madrid). He said Frankston had a number of “pearls”, such as the foreshore and beach, Kananook Creek, Olivers Hill, its colourful history, but asked where was its jewel in the crown? “Do you have an asset map of your city? If not, produce one.  “Frankston can be the lifestyle capital of Victoria – living, learning, working, playing.”

Asked about Frankston’s growing student population at the Monash and Chisholm campuses, he said: “A great city-campus vibe will shift the Frankston student experience. The small stuff is important to students. Which trader is doing a $10 chicken and rice? Who’s doing laksa? Where can I get a feed at 9pm on a Tuesday night?”

Renewal was not just about retail – art was a strong economic driver, he said, citing the McClelland Sculpture Park and Gallery, which he said was arguably the best public sculpture park in Australia if not the world.  “Bendigo was one of few provincial cities in Australia unaffected by the GFC due to the Bendigo Art Gallery and its popular exhibitions, including the Marilyn Monroe show.” (The first international exhibition was The Golden Age of Couture in 2008–09; major exhibitions have visited Bendigo almost every year since then – drawing significant crowds to the city.)

Mr Rochecouste cited successful Village Well projects in Christchurch, New Zealand; Adelaide; Canberra; Brixton, UK; St Kilda, central Melbourne; Porto, Portugal; and Wollongong, NSW.  He said rebranding Frankston was not just about creating a new logo and identity, but about civic leadership that would create the conditions for the investment sector to say “Let’s invest in Frankston” and for people to say “Gee, Frankston is on the up; let’s move there”.
Change would not occur overnight or in one or two years. “Wollongong was a tough city to revive,” he said. “We had five goes – three shots with the council and two shots with private developers. Then we put the two together and found success, but it took years.”

Frankston’s renewal would benefit the whole region not just Frankston, he said. The whole community needed to be part of the process. This included developers, many of whom were now embracing the concept of multi-use projects.
Mr Rochecouste said the greenfield development of Rouse Hill Town Centre (RHTC) in Sydney’s northwest was a good example of a shopping precinct that had benefited from the concepts of placemaking and creating “regenerative” built environments. Unlike most shopping centres, it was a true town centre with streets, a library, town square (with cafes), outdoor and indoor restaurants, big and small retailers, and indoor and outdoor public spaces.

At the end of his talk, Mr Rochecouste took questions, which quickly became a workshop. He posed a question to the audience: what personality traits would we like a future Frankston to have?

“This is a conversation our community needs to take forward,” Committee for Greater Frankston chief executive Ginevra Hosking said after the talk.

You can view Gilbert’s inspiring Frankston presentation on our website.

Do you get frustrated that Frankston has a poor image? Do you wonder how that image can be turned around?
If you said yes to either of these questions, then the next Committee for Greater Frankston member’s breakfast is for you.

Gilbert Rochecouste — an inspiring place-changer and vibrant speaker — will be in Frankston in January. As the managing director and founder of Australia’s leading placemaking consultancy, Village Well, Gilbert has worked with communities across the world to get over their image problems and realise their true potential. He’ll explain how Australian cities with poor public perceptions like Wollongong and Newcastle have been reversed. He’ll also share insights into how Frankston can be steered into a more positive space in which we can all be proud.

Join Gilbert on what could be the start of an inspirational journey to transform the way investors, tourists, residents and shoppers think about Frankston:

Established in 1992, Village Well grew from the eclectic community owned and managed Ross House in Flinders Lane, Melbourne, a place that has inspired many social and community enterprises. Village Well is now Australia’s leading creative placemaking consultancy, inspiring the search for renewed meaning, purpose and pride in places.

Village Well contributed to the activation of Melbourne’s laneways in the early 1990s, seeking affordable studio and office accommodation in the heart of the city, lobbying Council for improvements to streets and services and organising one of the city’s early laneway festivals. Village Well has since been influential in the collaborative creation of many of Melbourne’s iconic places, celebrated places across Australian cities and regional towns and the reimagining of admired places internationally.

In these two decades, Village Well has refined and developed unique processes of analysis, engagement, innovation, research and project management, tapping into community potential to discover the DNA of a place that informs its future development and use. Village Well have gained a exceptional reputation for a creative and holistic approach to development and the activation of places

Read about other Village well placemaking initiatives, like how: