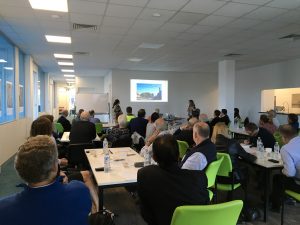 C4GF members, landowners, traders and community gathered on April 15, 2021 to hear from Council about their plan to reshape our city centre and to have a say on what our city vision should include. The discussion covered both ‘revitalisation of the public spaces’ and ‘a structure plan for private land’.

C4GF CEO Ginevra Hosking set the scene with an overview of past city planning initiatives, what has and hasn’t worked, and where the major pain points are that now need addressing.

Following from Council’s presentation of a short list of ‘immediate actions’ (including more Nepean Highway outdoor dining and lighting) that have received in principle support from the Frankston Revitalisation Board, the team from Echelon planning workshopped the nuts and bolts of what the stakeholders in the room wanted from a transformed city centre.

The common sentiment from around the room was that Frankston is the only waterfront city that hasn’t harnessed the potential that comes with being bayside. Glenelg and Geelong’s waterfront precinct were put forward as examples of best practice – a far cry from where we are today.

In order to attract visitors, businesses, government organisations, investors and the like, authorities need to create a city that people want to come to. Currently, anti social behaviour and derelict buildings, continue to be an ongoing detraction.

Other topics of discussion and debate included identifying the heart and soul of the city (many considered these were lost), how to create a 24 hour city, transport and connectivity, what the role of parking is (and will be going forward,) and the ideal type and height of buildings our community wanted to see.

Frankston City Council’s Mayor, Deputy Mayor and CEO met with stakeholders at the conclusion of the formalities to hear first-hand what the people in the room were passionate about and give their personal assurance that Frankston’s current Council is committed to delivering the change that will unleash our city’s potential.

So where to from here?..

Council has asked to re-engage with the group in August and November to “double-test the emerging structure plan ideas” that have surfaced throughout their consultation phase.

We’ll be in touch when more detail is to hand.