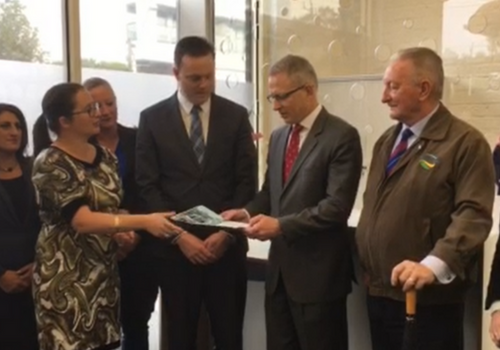 One week after the federal Budget, local federal MP Chris Crewther hosted a roundtable at his new office in Playne Street to advance discussion about and planning for the $450 million plus Frankston to Baxter rail extension.  On 8 May federal treasurer Scott Morrison had delighted proponents of the project including the Committee for Greater Frankston (C4GF) when he announced $225 million towards the extension.

Mr Fletcher said federal funding for the rail extension will come over four financial years: $10 million in 2019-20; $25 million in each of 2020-21 and 2021-22; $165 million in 2022-23.  He said the business case had been funded by the federal government and was being prepared by the state government. It would go to tender later this year and was expected to be completed in early 2019.
Once costed, this opens the way for the state and federal governments to fully fund building the rail project, he said.  Mr Fletcher said conditions of the Budget allocation included that the $225 million capped funding was to be matched by the Victorian government, and the federal government had requested a seat on the project steering committee.  A project manager had been assigned by the state government.

The minister said the funding was “part of the Turnbull Government’s record $75 billion investment in key infrastructure including more than $20 billion for Victoria”.  Mr Crewther told attendees the rail extension would “enable high-capacity metropolitan electric trains to operate on the rail line, increasing capacity, slashing travel times and improving service reliability for our community and taking cars off our roads”.

Ginevra Hosking said the committee was advocating for:

Mornington Peninsula Shire’s representatives said the council was advocating for electrification from Frankston to Hastings (22km) with Frankston to Baxter (9km) as stage one.
On 23 May, the shire council voted to support the project. In a statement, mayor Cr Bryan Payne said the project would be a “major boost to the region and provide the foundation for long-term strategic planning for future rail services on the Mornington Peninsula” but said Baxter was “surrounded by Green Wedge land, with highly constrained capacity for growth”. He said the shire wanted to be part of the state government’s advisory panel.