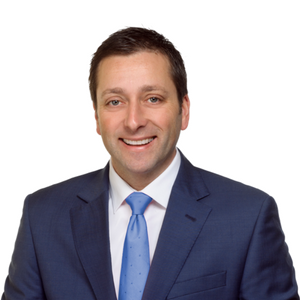 Before lunch, Mr Guy met with the committee’s board and was briefed about its key priorities including generating jobs for the region, extension of the Frankston train line, more car parking, duplication of Lathams Road in Carrum Downs Industrial Estate, and supporting creation of a medical health, teaching and research hub at Frankston.
During his address, he covered these topics and more, stating that electrification of the rail line from Frankston to Baxter was one of two major rail projects in the state. “The line does need extending,” he said, “and we will be making formal comments [about the project] in the months ahead.”

Mr Guy said the Opposition also supported rebuilding Frankston Hospital and would make public announcements after the feasibility study had been completed.   He covered the Opposition’s multibillion dollar plan to “grade separate” more than 50 congested road intersections (including Frankston’s Cranbourne Road–Moorooduc Highway intersection); said his government supported expansion of the Port of Hastings; reiterated proposals to lock up violent criminals who breach bail or parole for longer; rejected safe injections rooms in Frankston; said he would remove the ban on onshore gas extraction to reduce electricity costs; and floated the idea of decentralising government department jobs not just to regional Victoria but also to metropolitan centres such as Frankston and Ringwood.

Mr Guy said he was impressed that the committee, Frankston Council and business leaders were pulling in the same direction to help manifest a 20-year vision for Greater Frankston.

The Committee for Greater Frankston is hosting Matthew Guy MP, Leader of the Victorian Opposition and Leader of the Liberal Party, at a business lunch.

Mr Guy says he is passionate about building better local communities and is concerned about Frankston. He brings a strong understanding of planning and development as he was Minister for Planning 2010–14.

He will speak about how the Liberal–Nationals Coalition, if it wins government in late 2018, will work with the Frankston community to create more jobs, strengthen the local economy and mobilise infrastructure investment in the Greater Frankston region.