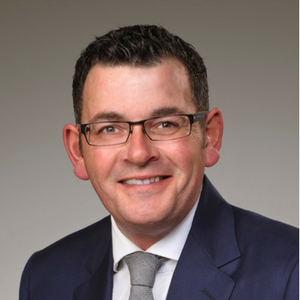 Premier hints at support for new hospital
PREMIER Daniel Andrews has given a tantalising hint of his government’s support for the ambitious Frankston Hospital redevelopment project.  Mr Andrews was guest speaker at a “business brunch” held at McClelland Gallery’s cafe on Wednesday 27 June, organised by the Committee for Greater Frankston.
During a wide-ranging speech, the Premier told more than 90 committee members and guests that Frankston Hospital was a “bellwether of how the area is going”. He said the May state Budget had included money for new emergency department (ED) crisis hubs to separate people with serious mental health or addiction issues from other patients. Frankston’s ED hub would be one of six in the state.  “I’ll have more to say about funding for Peninsula Health and the hospital in the near future,” he said with a smile.

The Premier during his talk.

Earlier, Committee for Greater Frankston vice-president Christine Richards said Frankston Hospital was doing a “terrific job with available resources and had treated 75,000 patients this financial year”.  “However, it needs an upgrade. A number of wards have four patients sharing a bathroom and toilet, which no longer meets contemporary infection control standards.” It was, for example, inappropriate for elderly women to be sharing a ward with young men, she said.
Modernising the hospital would mean 1000 jobs during construction and then 500 long-term jobs for doctors, nurses, allied health professionals and administration staff.  Committee chief executive Ginevra Hosking said the $380 million plus hospital project would “be a vital investment for the healthcare of the community as well as future economic prosperity and jobs growth in the greater Frankston region”.
“Redevelopment will enable teaching and academic research into the fields of aged care (including dementia), chronic diseases such as diabetes and heart disease, and social health issues.” She said the project would include integrated maternity and children’s services, cancer diagnosis and treatment under one roof, and clinical teaching spaces for training doctors, nurses and allied health staff.

In what was seen by many as an election pitch, Mr Andrews outlined his government’s schools, hospitals, road and crossing removal construction programs, which had generated 75,000 jobs. They were part of 340,000 jobs created since the government was elected in 2014, he said, and showed Victoria had a buoyant and confident private sector. The government was spending $80 million on schools in the Frankston region: “A small but powerful investment.”

The Premier indicated his government would not make any commitment to fund the extension of the Frankston train line before the state election in November – a project that the Committee for Greater Frankston and Frankston City Council have stated would bring significant benefits to the region. Addressing the Premier at the event, Christine Richards told him the rail extension would improve access to the hospital, greatly expand the catchment area for students of Monash University’s Peninsula campus, connect Karingal and Langwarrin’s 37,000 residents with quick and reliable public transport, and free up car parking in Frankston’s CBD.

Other topics covered by the Premier included free courses at TAFEs and a new initiative at 100 schools including in the Frankston region that would see students studying for VCAL or VCE and a trade certificate at the same time.

The Premier outlines his governments commitments to better schools, health and transport in the Greater Frankston region.

Mr Andrews took questions from the floor and first on the mic was Frankston City mayor Cr Colin Hampton, who asked about the rail extension project (which the federal government allocated $250 million for in its Budget last month and called on the state to match the amount).  Mr Andrews said the business case was underway and would be completed “next year”. The Premier said he would ask Minister for Public Transport Jacinta Allan to keep the community informed.

Other questions include one from Mornington Peninsula Shire mayor Cr Bryan Payne who asked the Premier for $2 million for an express bus from Rosebud and Dromana to Frankston station (“I’ll look at it”) and one from Kim Jackson, executive manager of Village Baxter retirement centre, who asked what could be done about Frankston Hospital’s current practice of accommodating “elderly patients who wander” in the high-security adult psychiatric ward rather than light-security general wards. Mr Andrews said Peninsula Health and the hospital were responsible “for service planning” but that this feedback was extremely valuable information for the new hospital design process.

Before the McClelland Gallery event, Mr Andrews was joined by local MPs Paul Edbrooke and Sonya Kilkenny to inspect the completed level crossing removal at Skye and Overton roads, which opened to road traffic on 23 June, and the under-construction Frankston train station, which started taking trains on 18 June. The station will be completed in December.

Premier Daniel Andrews (right centre) and Frankston MP Paul Edbrooke had a chance encounter with Year 7 students of Frankston High School at McClelland Sculpture Park and Gallery on Wednesday 27 June. The students were on an excursion

The Committee for Greater Frankston will host a brunch this month with Daniel Andrews, Premier of Victoria.

Mr Andrews is passionate about local jobs, schools and hospitals and making a real difference in the lives of local families.  He will speak about these issues, including his Government’s investment in road and rail to create a more connected city.

Other topics will include the Government’s work with the Frankston community to create more jobs, strengthening the local economy and investing in the Greater Frankston region.