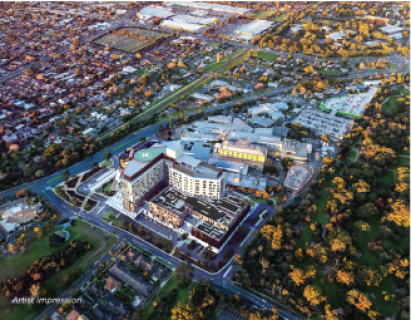 The state government says it is the largest-ever health infrastructure investment in Melbourne’s southeast.

Main works are due for completion in late 2025.

• A community centre and childcare centre (to be built after the tower is completed).

The project will be built and managed by Exemplar Health consortium, which comprises Capella Capital (sponsor and investor), Aware Super (investor), Lendlease (builder), and Honeywell and Compass Group Australia (facilities and maintenance managers).

Frankston will remain a public hospital, with Peninsula Health continuing to provide all clinical healthcare services.

The government said the project would “support up to 1700 jobs from construction and new opportunities for healthcare workers”.

C4GF chief executive Ginevra Hosking said the redevelopment was a fitting way to mark the 80th anniversary of what started as a small country hospital that had been supported by the community and generations of volunteers.

“The hospital now serves a catchment of 400,000 people, equivalent to Canberra,” she said.

“The committee congratulates the Victorian government and its agencies, Peninsula Health, MPs Paul Edbrooke and Sonya Kilkenny, and Exemplar Health for their determination to keep the project on track during pandemic restrictions.

“The expanded hospital will enable Peninsula Health and Monash University to train the next generation of doctors, nurses and allied health professionals, and create greater prosperity for our region.”

Ms Hosking said C4GF hoped many of Frankston and Carrum Downs’ innovative businesses would be involved in the construction and ongoing running of the hospital.

More information including a fly-through (computer-animated video) and artist’s drawings is at:

Cranes on horizon for Frankston Hospital

Architects shovel-ready for next TAFE build