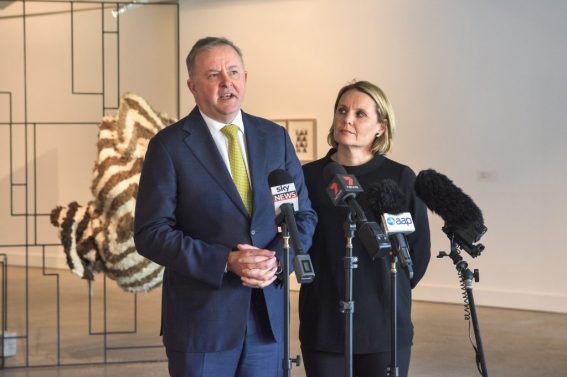 Anthony Albanese first announced his support of the Frankston rail extension with Dunkley candidate Peta Murphy in 2018 at a Committee for Greater Frankston-organised lunch.

THE Frankston-based seat of Dunkley was retained by Labor’s Peta Murphy at the election on Saturday.

Ms Murphy increased her 2019 paper-thin margin by a substantial 4.2 per cent over her Liberal opponent, Sharn Coombes.

Committee for Greater Frankston chief executive Ginevra Hosking congratulated Ms Murphy and said the Dunkley electorate had been fortunate to have two strong candidates this year.

Ms Hosking said electorates around the nation had sent all governments and political parties a clear and emphatic message – Australians want good, local, competent members of parliament and don’t necessarily care which faction of politics they come from “as long as they are intelligent and forward thinking, believe in political integrity and represent their communities well”.

She said the so-called teal wave was likely to see six independents win seats from Liberal MPs in Victoria, NSW and WA, paired with an unprecedented rise in primary votes for other minor parties including the Greens and UAP.

“The concept of a safe seat has been thrown out the window. Now it is even more important to listen to the local constituency and work hard to deliver good results that improve people’s lives,” Ms Hosking said.

“With federal Labor now likely to form government, Peta Murphy will have a stronger voice in Government instead of Opposition, and the stars are aligning for our region with federal Labor’s late campaign promise of unlocking $4 billion for Victorian infrastructure.

“Four days before the election, we were delighted to see now Prime Minister Anthony Albanese and his infrastructure shadow minister, Catherine King, making much of unlocking $4 billion of federal funding for Victoria – earmarked for the abandoned East West Link project – for use on Melbourne’s Suburban Rail Loop stage one as well as several other projects that had stalled under the Coalition including the Frankston to Baxter rail extension; Monash rail extension; and Shepparton bypass ‘while focusing on Labor’s priorities’.

“Infrastructure Australia listed the Frankston rail extension project in 2020 as a nationally significant project that should be built in the next five years, and would provide the backbone of a superior and much-needed public transport network for our city and the adjacent region.”

Mr Albanese backed the project when in Opposition in 2018 as shadow infrastructure minister when he matched the Coalition government’s $225 million in initial funding for the rail extension and said he wanted it built earlier than the government had promised.

Recent federal and Victorian budgets had yet again put outer suburbs like Frankston on infrastructure rations but Labor’s win on the weekend may provide light at the end of the tunnel.

“This additional federal funding from the $4 billion is vital for rail electrification beyond Frankston to go ahead. We want the Victorian Labor government on board too – without its support the project is vetoed.

“With Labor now in power in Canberra, and Victoria going to the polls later this year, Frankston state Labor MP Paul Edbrooke has the ball in his court to build the long-awaited rail extension. He knows his electorate’s biggest infrastructure challenge is Frankston’s failing public transport network, and the damage it is wreaking on our city’s revitalisation prospects.”

On Sunday night on her Facebook page, Sharn Coombes posted: “Congratulations to Peta Murphy … on holding Dunkley, and I wish her all the best in serving our community.”

Ms Hosking said the two women had run good campaigns. “It was great to see two strong local candidates, and on behalf of the Committee for Greater Frankston I congratulate Peta Murphy and look forward to working with her on continuing the revival of Frankston so Dunkley continues to prosper and thrive.”

• In neighbouring Flinders, based largely on the Mornington Peninsula, Zoe McKenzie retained the seat for the Liberal Party, replacing former health minister Greg Hunt who retired. The Liberal vote slipped only marginally.