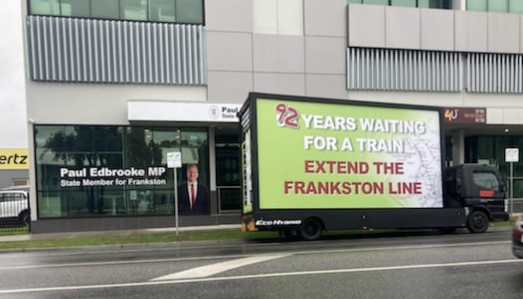 The Victorian Budget was again a great disappointment for proponents of the long-proposed Frankston rail extension. Not one red cent was allocated to the project.

Frankston was mentioned just once in the Budget, announced on Tuesday by Victorian Treasurer Tim Pallas.

The state government doled out $9.7 million for suburban streetscape improvements, yes, less than $10 mill – and Frankston has to share this paltry amount with seven other suburbs – Boronia, Broadmeadows, Lilydale, Melton, Noble Park, Reservoir and Tarneit.

“It is a miserable amount, a token that will not satisfy anyone from those areas,” said Committee for Greater Frankston CEO Ginevra Hosking. “In fact, it’s downright insulting. Putting it in the Budget simply draws attention to how this government is starving outer suburbs of vital infrastructure funding.”

Plus a first tranche of $2.6 billion for 2026 Commonwealth Games with Geelong being one of four athlete’s hubs.

“While we applaud Geelong’s advocacy and how well they’ve done in this Budget, the question has to be asked: why is this government failing outer suburbs like Frankston so badly?

Ms Hosking said Frankston received two items for health and education – $29 million to “commandeer Frankston Private Hospital to assist the state catch up on public elective surgery not done during the pandemic” and Naranga School in Karingal receives $7.6 million as part of an upgrade bundle of $326 million for 36 specialist schools that cater to children with a disability.

Ms Hosking said the federal government’s $225 million for the Frankston rail extension remained on the table, “but the Victorian government continues to ignore the project”.

“This Budget has not added one cent towards fixing our region’s inadequate public transport network.

“The Budget was a perfect opportunity for the Andrews government to fund its half share of the minimum first stage requirement – a 5km extension to Langwarrin with a new station at Monash University, and a 2000-space park and ride plus bus terminus for Mornington Peninsula commuters. On a single track, only $225 million was needed.

“Instead, Frankston again has received no infrastructure funding for the coming 12 months. It’s a disgrace; very disappointing.”

Ms Hosking said there has been bipartisan federal support at the past two federal elections for extending the line – “a vital project to establish the backbone of our region’s future transport network” – but not enough money committed to building it.

“Without additional state and federal government backing, this project will not proceed. Such ineffective civic leadership is not fair on Frankston and Mornington Peninsula residents.”

Ms Hosking said “politicians are after your vote this year – at the federal election in May and in November at the Victorian election. When they ask for your vote, ask them: where the bloody hell is our train?

Funding promised for art trail Sky is struggling to compete for a new rental in Melbourne, in a trend that’s ‘getting worse’