And away we go – the election campaign 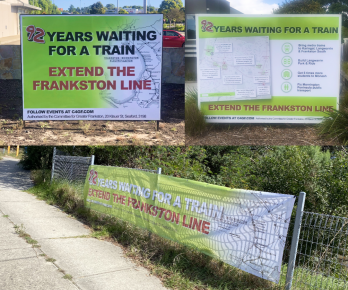 After months of speculation, the federal election campaign started last Monday and there’s just five weeks until polling day on Saturday 21 May.

The campaign will likely focus on cost-of-living pressures, climate change, and Liberal and Labor competence to govern, but in our electorate of Dunkley, all eyes will be on which party stumps up the money to build the Frankston rail extension.

At the past two federal elections, both major parties made promises to build the extension but there are insufficient funds on the table – AND the project can’t go ahead without Victorian government approval and co-funding.

C4GF’s public awareness campaign about the underfunding started late last year with the theme “92 years waiting for a train – Extend the Frankston line” and now the campaign ramps up.

With most of the community backing the campaign, local media have been terrific at keeping the community informed including radio (3MP and RPP-FM) and print (MP Magazine, Frankston Times and MP News Group) and online.

• Shire’s ‘all aboard’ for electric train

• Where the bloody hell is our train?

Local businesses know how important it is to have good public transport to reduce congestion and make better use of car parking. And they are right behind the campaign with billboards, banners, posters and stickers popping up everywhere.

Remember, when politicians ask for your vote this election, ask them: Where the bloody hell is our train?

Here’s the latest from the Liberals and Labor on C4GF’s election promises tracker.
Multi-storey car park on the way Locals speak on ‘how to improve Frankston public transport’