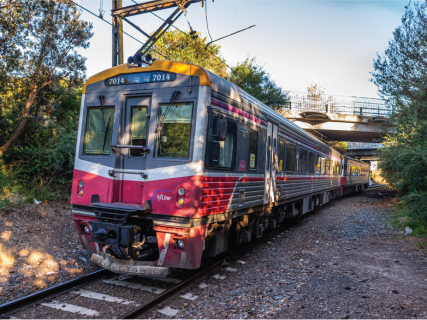 MORNINGTON Peninsula Shire Council is campaigning to extend the metro train line from Frankston to Langwarrin.

The 11-member council late last year unanimously agreed to back electrification beyond Frankston and has now made it a “priority project”, actively seeking state government support.

The shire says Mornington Peninsula residents would benefit from a 2000-plus space commuter park and ride at a new Langwarrin station – which would be next to Peninsula Link freeway – as an alternative to driving into and parking in Frankston’s congested CBD.

The shire’s advocacy for the project would appear to have bipartisan support with the council decision led by Cr Paul Mercurio, the Labor Party’s candidate for Hastings electorate in the state election later this year, and Cr Steve Holland, a prominent member of the Liberal Party on the peninsula.

The council’s position replaces the previous council’s “all or nothing” policy of “No [train to] Baxter, extend to Hastings”, and instead seeks “Stage 1 for electrified double track from Frankston to Langwarrin (including park and ride and bus interchange)” and ultimately to Hastings.

Double track to Langwarrin, estimated to cost between $650m and $850m, is not the cheapest option but provides most flexibility for future extension of the track and would return transport, social and economic benefits totalling $3.4 billion.

The campaign has been praised as “pragmatic” by leading advocacy group Committee for Greater Frankston, which was instrumental in the rail extension being listed by Infrastructure Australia as a near-term, nationally important project.

Committee CEO Ginevra Hosking said councillors had unanimously supported extending the line because “they know it will form the backbone of our region’s future transportation network”.

“Electrifying the track to Langwarrin is an immediately achievable first step as there is already $225 million of Commonwealth government funds guaranteed in the federal Budget,” she said.

However, she cautioned even the section to Langwarrin wouldn’t go ahead without the cooperation of both state and federal governments, and the state was not yet on board.

The shire council’s advocacy document highlights that there is currently no access to public transport for 82 per cent of the peninsula community.

Ms Hosking said another way of looking at it was that five per cent of Melbourne’s population “already lives beyond the end of the Frankston train line, and this number grows daily”.

“Current and future demand for public transport means that councils with vision and guts, like the shire, can get on with long-term strategic infrastructure planning.”

The council stated that, “improved rail access will provide clear benefits to our community” including “a reduction in car dependency; better connectivity and access to jobs, education, services and amenity; and improved connectivity for those with restricted mobility”.

Ms Hosking said the shire council was showing that “it understands the big picture, that transformational public transport projects like this need to get rolling so the next generation will benefit”.

“The council’s advocacy campaign will give the rail project a big boost. It’s important to have both local councils reminding today’s state and federal governments to build the infrastructure our children will rely on.”