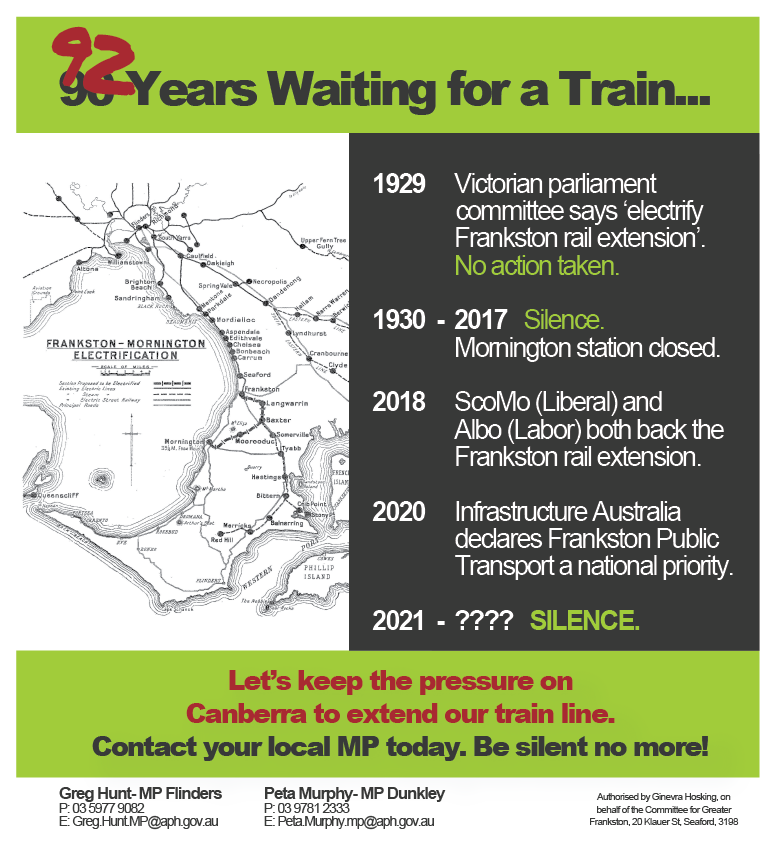 IT’S 92 years since the community was told the electrified rail line should be extended beyond Frankston station.

A parliamentary committee recommended the line go 5km to Langwarrin and then down to the Mornington Peninsula.

As the nation heads towards another federal election campaign, local eyes are on the incumbent Coalition government to see if it will honour its 2018 pledge to build the rail extension. And on Federal Labor will be asked to reconfirm its 2018 commitment to the project as it attempts to win government in 2022.

If built to Langwarrin, the line would connect 37,000 residents in eastern parts of Frankston to Melbourne’s electrified metro rail network – and provide easier access to the network for 160,000-plus Mornington Peninsula residents.

For just 5km of new track along the existing rail corridor, the Frankston line would provide: a purpose-built park and ride at Langwarrin for commuters; a metro train station for Monash Uni’s Peninsula campus staff and students; and a vital backbone for new bus routes.

Crucially, it would free up affordable car parking in Frankston CBD to benefit traders, workers and visitors.

Prime Minister Scott Morrison, then federal treasurer, announced $225 million in the May 2018 Budget to kick-start the Frankston rail extension.

Mr Morrison was joined by Health Minister Greg Hunt (Flinders MP) and then Dunkley MP Chris Crewther when the treasurer visited Frankston a few days later to promote the project. Mr Morrison reaffirmed the pledge again in September 2018, while standing on “forgotten” Leawarra station near Monash Uni, after he was made Prime Minister and had started the 2019 election campaign.

In acknowledgment of the vital importance of this overdue local project (and in a rare show of Dunkley bipartisanship), the rail extension commitment was also matched by Anthony Albanese, then shadow minister for transport and infrastructure, now federal Labor leader, and Labor’s current Dunkley MP Peta Murphy.

Committee for Greater Frankston CEO Ginevra Hosking said the project’s lack of progress since 2018 was “shameful” as well as “economically damaging” and a “squandered golden opportunity”.

“We’re up to 92 years and counting. Frankston’s rail extension is a listed national infrastructure priority, one of Australia’s most important infrastructure projects. A mere 5km of track saves our city from drowning in car parking congestion,” she said.

“We’re over state and federal governments blaming each other for the lack of action. Election promises are meaningless if the elected government doesn’t work with the state to deliver them. It’s time to extend the track and resolve once and for all the public transport problem Frankston first identified in 1929.”

Prime Minister Scott Morrison, front centre, first backed the Frankston rail extension in May 2018 as federal treasurer and then as prime minister four months later. He is with then urban infrastructure minister Alan Tudge, front right, and then Dunkley MP Chris Crewther, right rear, on Leawarra station in September 2018.

Then federal treasurer Scott Morrison was joined by health minister and Flinders MP Greg Hunt, left, and the then Dunkley MP Chris Crewther at Frankston Hospital in May 2018 to promote health care funds in the Budget and $225 million for the Frankston rail extension.

Anthony Albanese backed the Frankston rail extension when he visited McClelland Gallery, Langwarrin, in July 2018. Then shadow minister for transport and infrastructure, now federal Labor leader, he was joined by Peta Murphy, who won Dunkley at the 2019 election.