Architects shovel-ready for next TAFE build 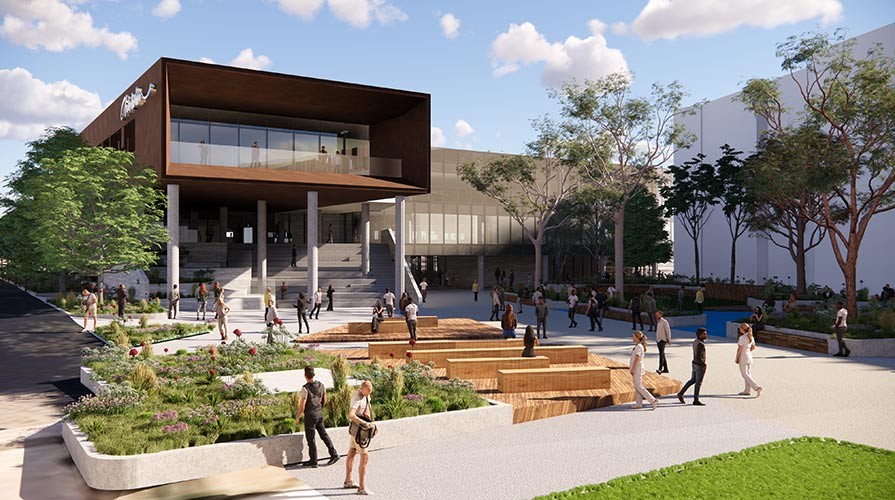 Boots are on the ground for the $67 million second stage of Chisholm TAFE’s Frankston campus redevelopment.

Two of the oldest buildings will be replaced by the new structure, which the government says will integrate with the $85 million “Stage 1 Precinct” completed in 2019.

Frankston MP Paul Edbrooke said “it is exciting to watch the continued revitalisation of Chisholm in Frankston, which is fast becoming a world-class campus for students looking for training”.

Chisholm director and CEO Stephen Varty said that “more students want to study at Chisholm than ever before, which is why we’re working to enhance the on-campus community and learning facilities. The structural and environmental design will reflect this”.

“Stage 2 Precinct will provide new learning spaces that respond to growing industry needs, including Community Services, VCE/VCAL and Foundation College courses, along with bespoke spaces for Art and Design. The precinct will also bring together a range of student support services into a Student Hub, along with a gallery space and onsite food and retail outlets.”

Work is due to start in October with completion in 2023.

The project will generate an estimated 132 jobs, including employment for 25 apprentices during construction, and at least 30 new teaching positions over the next decade.

Director of Campus Services, Infrastructure and IT, Richard Pratten, said much of the planning and scoping of the project was underway with consultation and advisory groups being established in coming weeks.

“The project has at its centre the needs of the Chisholm student community. We will be seeking students’ input; asking for their contribution of ideas to make this a success,” he said.

Committee for Greater Frankston CEO Ginevra Hosking said confirmation of stage two was welcome as it would “maintain continued investment in Frankston’s growing health, biomedical and higher education sector during this difficult time”.

This article was also published in the Mornington Peninsula Magazine.