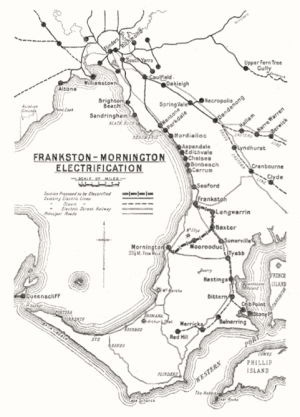 The following letter to the editor was submitted on 11 February 2021 in response to the State Government announcement about the Pakenham East rail extension which was published in the Herald Sun.

Hallelujah! The Victorian Labor government has turned its attention to fixing outer suburban public transport – by fast-tracking a two-kilometre extension of the metropolitan rail line beyond Pakenham.

People in Frankston and surrounds won’t be celebrating, however.

Our community has needed the line extended beyond Frankston for more than 90 years. The project was first recommended in 1929 by a parliamentary committee but state Cabinet said no and we’re still waiting.

The proposed Pakenham East station will be used by 20,000 people when the suburb’s 7200 houses eventually get built.

Frankston and the Mornington Peninsula have 400,000 people – 20 times Pakenham East’s projected population – who would benefit from a rail extension with commuter parking at a new Langwarrin station and one to service Frankston Hospital and nearby Monash University.

Both Infrastructure Australia and Infrastructure Victoria have recommended investment in the project. We already have the population to support the extension. It’s time for the Victorian Labor government to act and extend our track.