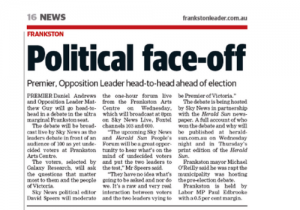 PREMIER Daniel Andrews and Opposition Leader Matthew Guy will go head-tohead in a debate in the ultra marginal Frankston seat.
The debate will be broadcast live by Sky News as the leaders debate in front of an audience of 100 as yet undecided voters at Frankston Arts Centre.
The voters, selected by Galaxy Research, will ask the questions that matter most to them and the people of Victoria.
Sky News political editor David Speers will moderate the one-hour forum live from the Frankston Arts Centre on Wednesday, which will broadcast at 8pm on Sky News Live, Foxtel channels 103 and 600.
“The upcoming Sky News and Herald Sun People’s Forum will be a great opportunity to hear what’s on the mind of undecided voters and put the two leaders to the test,” Mr Speers said.
“They have no idea what’s going to be asked and nor do we. It’s a raw and very real interaction between voters and the two leaders vying to be Premier of Victoria.”
The debate is being hosted by Sky News in partnership with the Herald Sun newspaper. A full account of who won the debate and why will be published at heraldsun.com.au on Wednesday night and in Thursday’s print edition of the Herald Sun. Frankston mayor Michael O’Reilly said he was rapt the municipality was hosting the pre-election debate.  Frankston is held by Labor MP Paul Edbrooke with a 0.5 per cent margin.

Thumbs up for kids’ ER
Frankston Hospital would share $62m

Election campaigns aren’t what they were.

Voters have their say in marginal seats of Victoria