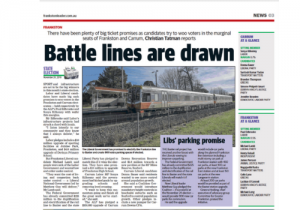 Battle lines are drawn
There have been plenty of big ticket promises as candidates try to woo voters in the marginal seats of Frankston and Carrum,

The Liberal Government has promised to electrify the Frankston line to Baxter and create 900 extra parking spaces if elected.  SPORT and infrastructure are set to be the big winners in this month’s state election.  Labor and Liberal candidates have made big cash promises to woo voters in the Frankston and Carrum electorates — held respectively by the ALP’s Paul Edbrooke and Sonya Kilkenny with wafer thin margins.

Mr Edbrooke said Labor’s infrastructure projects had struck a chord with locals.  “I listen intently to our community and they know that I always deliver,” he said.  Labor pledges include a $10 million upgrade of sporting facilities at Jubilee Park, Frankston, and $4.8 million upgrade of Derinya Primary School.

But Frankston Liberal candidate Michael Lamb said people were sick of the Labor Government and wanted law and order under control.  “They want the cost of living and congestion back under control — a Liberal National Government led by Matthew Guy will deliver,” Mr Lamb said.  The Federal Government has already committed $225 million to the duplification and electrification of the rail line to Baxter and the state Liberal Party has pledged to match this if it wins the election. They have also promised a $10 million to upgrade of Frankston High School.

Carrum Labor MP Sonya Kilkenny said the government had kicked goals by upgrading schools and removing level crossing.  “I want to keep this momentum going and finish all the great work we’ve started,” she said. The ALP has pledged a $350,000 upgrade of Carrum Downs Recreation Reserve and $2.6 million towards a new pavilion at the RF Miles Reserve, Seaford.

Breakout insert  Libs’ parking promise
THE Baxter rail project has received another boost with the Liberals vowing to improve carparking.  The Federal Government has already committed $225 million to the duplification and electrification of the rail line to Baxter and the state Liberals will match it if elected.  Now Liberal leader Matthew Guy pledged the Coalition — if successful at the November 24 election — would provide 900 new car parks for commuters.  He said the upgrade would include car parks along the planned Frankston line extension including a multi storey car park at Frankston station with 450 car parks, at least 100 car parks at the new Frankston East station and at least 150 car parks at the new Langwarrin station.  At least 200 car parks would be provided as part of the Baxter station upgrade.  Ginevra Hosking, chief executive of advocacy group Committee for Greater Frankston, praised the initiative.

Train pains could be on the way

CARRUM Liberal candidate Donna Bauer has conceded that $450 million may not be enough to complete the extension of the Frankston line to Baxter.

The project, which would involve electrifying the line and duplicating the track, has received $255 million in funding from the federal government, while state Liberals have pledged to match that funding if elected.  However, state candidate Ms Bauer told a Frankston Council organised candidates’ forum on 31 October that “it is going to be a staged project”. “We know that Mornington Peninsula Shire and council actually want to continue the project down their way as well. It will be ongoing, there is 8km that will be electrified along the existing Stony Point line. Initially we may just get to Langwarrin, and not get all the way to Baxter.  We’re very interested to see the business case. But I think that to say we’re waiting on a $3 million business case, now’s the time, put your money behind it. We’re heading into an election in a very marginal seat, we’ve already committed $255 million here, if we need more money, and if I get the privilege of being your next member for Carrum I’ll lobby for more money.”

Ginevra Hosking from the Committee for Greater Frankston has called on state Labor to commit to the project. “Many people in our region think the extension is guaranteed to be built. It’s not. The Liberal Party at state and federal levels, and federal Labor have said they will fund the project if they are elected, but the Victorian Labor government has yet to jump on board,” she said.  “Our fear is that unless the Andrews state government commits to building the project, the Frankston rail extension plan will languish and the $225 million of Commonwealth funding allocated in the May budget will be lost.” The Labour state government is conducting a business case into the project to work out the exact cost before any commitment is made.

Mornington Peninsula Shire has changed tack and virtually ruled out backing Baxter as the end of the electrified train line from Frankston.
Shire councillors last week signalled they want an electrified rail line to Hastings, ruling out their earlier support for Baxter to be first in a two-stage electrification process.
In the lead up to the Saturday 24 November state election, councillors have called on “all political parties … to commit to extending electrification of the Frankston railway line to Hastings in the current Baxter electrification business case”.
In doing so, councillors have also withdrawn their support for a two-stage development that would see an electrified line go to Baxter first and then Hastings.
However, the politicians are unlikely to back the shire as the cost of electrifying the line to Baxter has been put at $450 million while $3 billion may be needed to take it to Hastings.
“The idea for a staged extension, starting with Baxter, leaves the possibility of waiting decades for the electric line to get to Hastings,” Cr David Gill said yesterday (Monday 5 November).
“Council has now decided on a major campaign to push for the electrified rail line to go to Hastings.
“Hastings is the logical place to end the electrified line because it has plenty of available industrial and residential land.
“There is much more at stake than Frankston’s need for parking and further development opportunities by moving its problems down the track.
“Baxter, in the green wedge, is not the site for large scale infrastructure development.”
The shire’s about face coincides with Planning Minister Richard Wynne’s announcement that a re-elected Labor government would “better protect Melbourne’s green wedges from overdevelopment”.
Energy, Environment and Climate Change Minister Lily D’Ambrosio said Labor will “do the planning work to connect 1881 hectares of parks and reserves … [between the] Edithvale-Seaford wetlands, Pines Flora and Fauna Reserve, Studio Park, Dame Elisabeth Arboretum, Cruden Farm, Langwarrin Flora and Fauna, Baxter Park, Sages Cottages, Moorooduc Quarry and Devilbend Natural Features Reserve”.
The shire was upset earlier this year when it was left out of talks to make Baxter the end of the line, even though the town is part of the peninsula municipality.
Mornington Peninsula mayor Cr Bryan Payne told The News on Monday that Baxter should not be the site for a one kilometre long overnight train stabling area.
He said the business case study for electrifying the line from Frankston to Baxter “should go all the way to Hastings”.
A recommendation adopted by shire councillors at the Monday 29 October planning services committee meeting says the business case by the Level Crossing Removal Authority (LXRA) “would best be served by extension of the electrified rail line to Hastings”.

The Committee for Greater Frankston has sought clarification from Mornington Peninsula Shire regarding their official advocacy position on the Frankston rail extension.  We will publish this once it becomes available.

Front page coverage: Time to get on board Keep informed before you vote: public information campaign update