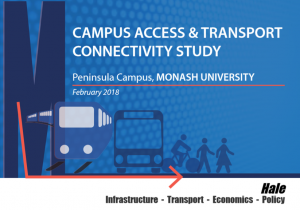 A NEW train station at “Frankston East” on the proposed Frankston to Baxter rail extension would be used by up to 5,000 people each weekday.  It would be among the top 25 busiest suburban stations in Melbourne. These are some of the key findings of a transport study prepared for Monash University by transport strategist Dr Chris Hale of University of Melbourne.

Yet the extension of the Frankston train line — and the benefits it will bring — are not guaranteed. Extending the train line requires both federal and state government funding. The Liberal Party at federal and state levels, and federal Labor have all committed to the project, but the Victorian Labor government has yet to do so.

The rail extension and new station would “profoundly rejuvenate” the Frankston line, according to Dr Hale. If one of the stations on the extended line is built between Frankston Hospital and Monash University’s Peninsula campus, it would be within 50 minutes’ travelling time for 83,000 people, up from just 14,000 people.

Dr Hale – who has advised major transport agencies in Australia, United States, Asia and Europe – said the extension and new station would increase the “strategic value” of Monash’s University Peninsula campus at Frankston as well as “deliver a world-class health and education precinct in an accessible, attractive, convenient location – connected seamlessly with affordable bayside housing, and ultimately with rail access through to Caulfield and the Melbourne CBD”.

The CEO of the Committee for Greater Frankston, Ginevra Hosking, said that Dr Hale’s conclusions joined the now lengthy list of economic and social benefits that extending the train line would bring to the region. ‘We urge the Andrews government to get on board with the overwhelming majority of Frankston people who support the train extension,’ she said.

Media coverage: October 2018 Front page coverage: Time to get on board