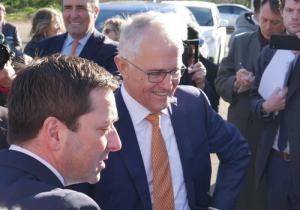 TUESDAY 17 July was another red letter day for Greater Frankston when the Victorian Opposition promised to match the federal government’s $225 million to build twin electrified tracks from Frankston to Baxter.
Opposition leader Matthew Guy was joined by Prime Minister Malcolm Turnbull when making the announcement at Baxter station.
Mr Guy said if the Liberal National Coalition won the state election in November, his government would match the $225 million allocated in the federal government’s Budget in May to extend the metropolitan train line and build a new station to service Frankston Hospital/Monash University and one at Langwarrin. Baxter station would be upgraded.

“This is a hugely important piece of infrastructure. It’s vital to improve mass transit across the city and across the state,” Mr Turnbull said.
The Prime Minister said the project would “ensure commuters on the Mornington Peninsula can get home to their families sooner and safer as well as bringing them closer to more employment opportunities as well as educational and health facilities”.

Committee for Greater Frankston president Fred Harrison (CEO of Ritchies supermarkets) said the Liberal Party at both state and federal levels had shown great foresight in backing the rail project to support the region’s growing population. “Extending the line will radically transform public transport in our region, driving job creation, getting cars off congested roads, and making better use of public and private assets like Frankston Hospital and Monash University,” he said. “We hope state and federal Labor get on board soon.”

Committee chief executive Ginevra Hosking said Liberal Dunkley MP Chris Crewther and Liberal state candidate Michael Lamb had been instrumental in securing this funding. “Labor’s Dunkley candidate, Peta Murphy, has given her personal support to the project, but federal and state Labor are yet to officially announce funding for the extension.”  Ms Hosking said the committee was asking the Andrews state government to show bipartisan support by matching the Opposition’s pledge.

She said $450 million would enable construction of a vital regional project connecting the hospital and Monash’s Peninsula campus to Melbourne’s rail network and also create a reliable backbone for local public transport in the region.  “Other benefits include providing trains for Karingal and Langwarrin, two of Melbourne’s most car-dependent suburbs with a combined population of 37,000 people, and freeing up crowded car parks in Frankston’s CBD as well as at stations such as Kananook, Seaford and Carrum.” She said the committee had been advocating for “park and ride” facilities to be built at Langwarrin (1000-plus car spaces) and Baxter, which would allow people to connect to trains in or near suburbs where they live, and improve access for train users on the Mornington Peninsula.

The state government is currently working on the rail extension business case, which has been funded by $3 million from the federal government. It is due to be completed in early 2019.
In a statement, Dunkley federal MP Chris Crewther said the extension would be the “largest infrastructure investment in the history of the Dunkley, Carrum and Frankston electorates”. It would create more than 4000 local jobs, reduce car emissions and improve connectivity.

Mr Guy said there were also other major shortfalls in public transport services between Frankston and the Mornington Peninsula including infrequent bus services that made it difficult for residents to access commercial, education and health services in Frankston and metropolitan Melbourne.  He said a Coalition government would also fund improvements to bus connections between Frankston East, Langwarrin, Baxter and the Mornington Peninsula, including route changes and frequency improvements to the 788 (Frankston–Portsea) and 783 buses (Frankston–Hastings).  “We need to ease the population squeeze, which is why I am so focused on planning for decentralising our population growth, and that means more roads and more public transport,” he said.