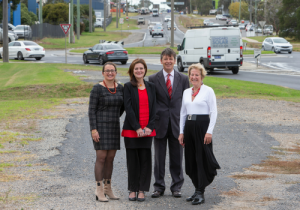 ROADS Minister Luke Donnellan visited Carrum Downs Industrial Estate on Thursday 3 May to provide detail about duplication of Lathams Rd, funding for which was announced in the state budget two days earlier. The $80 million plus project will see the industrial estate’s main road converted from two to four lanes between Frankston–Dandenong Rd and Oliphant Way, a distance of 2.5 kilometres. The work will include a second bridge over Peninsula Link parallel to the existing bridge, creating two lanes in each direction.

The Carrum Downs project is part of the state government’s Suburban Roads Upgrade, $2.2 billion to improve arterial roads in the southeast including Narre Warren–Cranbourne Road at Cranbourne, Pound Rd West at Dandenong South, and Healesville-Koo Wee Rup Road at Pakenham as well as five roads in the northern suburbs.

Mr Donnellan said expressions of interest would be sought mid-year, contractors appointed in early 2019 and completion in 2020. “The $2.2 billion package is about boosting local economies by building a more efficient road network,” he said. “Productivity in the industrial estate could be lifted 20 per cent after duplication.”

Ginevra Hosking, CEO of advocacy group Committee for Greater Frankston, said the project would “provide a massive boost to productivity by reducing traffic congestion and increasing access at peak times”. “The industrial estate is one of our region’s economic success stories. It generates $2.85 billion a year and employs almost 6000 people. Job growth in the precinct has risen 6.5 per cent each year, 13 times greater than the southeastern region’s half a per cent.” She said traffic congestion on Lathams Rd and surrounding streets had severely hampered the growth of industrial estate businesses in recent years.

Mr Donnellan acknowledged the role of Carrum MP Sonya Kilkenny in advocating for the project as well as the work of Committee for Greater Frankston. Ms Kilkenny said the committee had “made it easier for me to push the project”. She said making industrial estate businesses more efficient would create more jobs. “Businesses here have created an economic powerhouse for the region.”

Advocacy Background
CARRUM Downs Industrial Estate is now more economically important to Frankston City’s economy than Frankston CBD. From a small light industrial area established in the 1980s, the estate has grown rapidly in recent years to be almost 90 per cent full. It was given a huge boost in 2008 when EastLink was opened, providing fast, direct access to markets in central Melbourne via EastLink and the Monash Freeway as well as destinations in the eastern and northern suburbs. More than 1500 jobs have been added in the past five years with many workers coming from the immediate area as well as further afield. Business is booming in the estate but success has brought traffic congestion.

Lathams Road is the backbone of this network and its duplication, announced by the state government on 29 April, will provide a big boost to the precinct’s productivity as well as improve safety.
Committee for Greater Frankston’s Lathams Road duplication campaign began in earnest in July 2017 when VicRoads’ regional director for metropolitan south east, Aidan McGann, was invited to a business breakfast at a cafe right in the middle of the industrial estate.

As committee president Fred Harrison wrote in a local paper the following month: “I had to admire the fortitude of … Aidan McGann [who] calmly told business owners that it was likely nothing would be done about their [Lathams Road] concerns in the next 10 years. “Then something wonderful happened. His position slowly changed as he heard the people’s stories: a business owner and his wife who were seriously injured when a truck hit their car; semi-trailers struggling to brake in the wet; insurance premiums rising due to the number of accidents; staff avoiding the road by driving 10 minutes out of their way down side streets. “[Mr McGann] said he wanted to help. He had heard ‘a strong case for accelerated development’, and would assign staff to coordinate planning.”

Planning started soon after. A VicRoads working group was set up to generate a number of models showing how Lathams Road could be duplicated and the costs. Statistics were collected from traffic counters. VicRoads had statistic from May 2017 showing Lathams Road carried 11,700 vehicles a day – 6700 eastbound and 5000 westbound. More than 10 per cent were heavy vehicles servicing industrial estate businesses.

A comprehensive dossier of interviews with 13 major businesses in the estate was prepared by committee CEO Ginevra Hosking and published last November. The businesses included truck body, food, paint, building materials, air-conditioning, furniture and beer manufacturers as well as service providers.
Business owners spoke about how road congestion was hampering productivity and making travel unsafe and inefficient for their staff and suppliers. They said peak-hour congestion hot spots gridlocked the precinct, deterred potential customers, and delayed delivery and dispatch trucks. Vehicles of all types were using residential side streets including through school zones to avoid congestion. Lathams Road was being damaged by traffic using its unmade shoulders to get around vehicles waiting to make turns. Traffic accidents had put people in hospital, and there were frequent “fender benders”.
At 3pm each weekday the Frankston–Dandenong Road and Lathams Road intersection, which has traffic lights, becomes almost impassable. This was confirmed by a traffic signal investigation showing that more than 300 vehicles per hour were attempting right-hand turns off Lathams Road, forcing traffic to wait for up to five traffic light sequences before passing through the intersection.
From EastLink to Frankston–Dandenong Road traffic lights, Lathams Road is two kilometres of unkerbed single road in each direction without turning lanes. The business owners stated that Lathams Road would be relatively easy to duplicate as the existing road easement would accommodate two lanes in each direction, without land acquisition.

With a now completed business case, the committee turned its advocacy efforts towards the state government. CEO Ginevra Hosking and board vice-president Christine Richards had meetings and subsequent discussions with Carrum MP Sonya Kilkenny who had discussions with Roads Minister Luke Donnellan and others.

Mr Donnellan accepted an invitation to attend a Committee for Greater Frankston business lunch at the Sandhurst Club in mid-March, which was attended by more than 40 committee members and guests. He said the government was giving “heavy consideration” to providing money for the project in this year’s state budget. The proposed upgrade of the Grant Road–Golf Links Road intersection at Somerville also was being considered. At the lunch, Frankston MP Paul Edbrooke hinted that putting some champagne on ice would not be wasted effort.

On Sunday, Mr Donnellan announced that money for the Lathams Road duplication and the bridge over Peninsula Link would be in the state budget. This is the first big win for the committee and proof that a coordinated, fact-based approach to government can be successful.

Lathams Road is Getting an Upgrade!

Work is set to commence on Lathams Road Upgrade