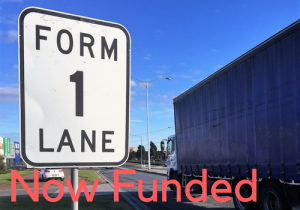 THE state government will duplicate Lathams Road in Carrum Downs Industrial Estate.  The project was announced on Sunday 29 April in one of the state government’s pre-budget statements. The budget will be released on Tuesday night by treasurer Tim Pallas.

On Sunday, Minister for Roads Luke Donnellan said Lathams Road would be duplicated between Oliphant Way and Frankston–Dandenong Road, a distance of 2.5 kilometres.  The works will include upgrading of intersections at Frankston Gardens Drive and Frankston–Dandenong Road and a new, wider bridge over Peninsula Link freeway.  Mr Donnellan said the project was part of the government’s Suburban Roads Upgrade, a $2.2 billion package to upgrade 13 arterial roads in southeastern and northern suburbs.

In a state government media release issued on Sunday, Carrum MP Sonya Kilkenny stated: “This upgrade will improve travel times, slash congestion, improve safety and boost reliability along Lathams Road so people can get to work, school and move around the area more easily.  “Lathams Road is such a vital road link for many people in the local community. This important upgrade will help people get to and from work and home and provide better and safer access around the growing industrial areas.”

Committee for Greater Frankston CEO Ginevra Hosking said the announcement was “fantastic news” for Carrum Downs Industrial Estate businesses as well as the wider community.  “Lathams Road is the backbone of the precinct and its duplication will provide a massive boost to productivity by reducing traffic congestion and increasing access at peak times,” she said.  “The industrial estate is one of our region’s economic success stories. It generates $2.8 billion a year and employs almost 6000 people. Jobs growth in the precinct has risen 6.5 per cent each year, 13 times greater than the southeastern region’s jobs growth of half a per cent.”
Ms Hosking said traffic congestion on Lathams Road and surrounding streets had severely hampered the growth of industrial estate businesses in recent years.

Michael Crowder, director of commercial real estate agency Nichols Crowder, which is based in the industrial estate, said the project would not only transform the industrial estate, but also “deliver investment and therefore more jobs for the residents of Frankston and the Mornington Peninsula”.
Mr Crowder praised Carrum MP Sonya Kilkenny: “Credit where credit’s due, we’ve been talking about this duplication for 20 years. Frankston City’s No 1 road funding priority is finally being achieved largely thanks to Sonya Kilkenny. Sonya listened to local business people’s concerns and actively promoted the issue within her own government. It’s fantastic to see it finally coming to fruition.”

Ms Hosking said acceptance by VicRoads of the need to duplicate the road had been a crucial element of getting the project into the state budget.  “The committee thanks Sonya Kilkenny, Paul Edbrooke as well as VicRoads’ regional director for metro southeast Aidan McGann and his team.”

Also announced on Sunday was an upgrade of Golf Links Road and Grant Road between Peninsula Link and Frankston–Flinders Road.

Key intersections will be upgraded, including the roundabout at the intersection of Warrandyte Road and Baxter–Tooradin Road, which will be realigned and get traffic lights. The upgrade will include sealed road shoulders and guard rails.

Golf Links Road is a key route for heavy vehicles accessing Peninsula Link, Somerville, Hastings and Western Port Highway.  The project will benefit the more than 8000 drivers who use the route including vehicles servicing Somerville-based Inghams, one of Australia’s largest poultry producers.

Lathams Road is Getting an Upgrade!

Work is set to commence on Lathams Road Upgrade