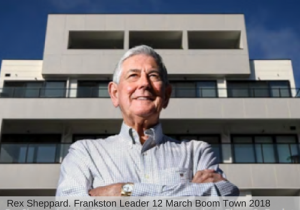 A DEVELOPER whose high rise apartment complex in Frankston’s CDB sold out within weeks predicts it will spark a unit building boom.

Highview Homes chief Rex Sheppard said state and local government investment, including the redevelopment of Wells St and the train station, had prompted him to build the five storey, 22 apartment complex in Playne St.  “If they are prepared to put in and put their money where their mouth is, I am prepared to go with them,” he said.  “This block became available and I thought ‘there’s nothing much happening in the way of apartments’ so I decided to buy it and develop it.”

Mr Sheppard said he thought it would take six months to sell the units, which ranged in price from $328,000 to $598,000, but they were snapped up within seven weeks.  Mr Sheppard said he had no doubt the success of his development would spark more in Frankston’s CDB — and he has already been sounded out for other projects.

Meanwhile, work on another high rise apartment development adjacent to the Clyde St Mall in central Frankston is already well underway, with the $16m development to include ground-floor shops and 60 apartments on the top three floors.

O’Brien Real Estate director Andrew Milne, whose firm sold the Playne St apartments, said the majority of buyers were owner-occupiers already living in the area. He said the project’s success would act as a catalyst for similar developments in Frankston CBD.

Ginevra Hosking, chief of advocacy group Committee for Greater Frankston, said the Playne St development was “a new yardstick for investment in Frankston”.  “The success of this Playne St development with its quality construction, market desirability and ease of planning approval sets a new yardstick for investment in Frankston,” she said.  “The committee predicts this development will inspire similar projects and continue to realise our bayside city’s true potential.”

CoreLogic figures show that the medium price for a unit in Frankston (up to last November) was $375,0000. Data also indicates 377 were sold in Frankston in the 12 months to last November.  Frankston Labor MP Paul Edbrooke said government investment was making the area more attractive.  “With the ongoing State Government investment — from nothing several years ago to major infrastructure and revitalisation of the area — we are proving again that Frankston is the place to live, work, play and invest,” he said.