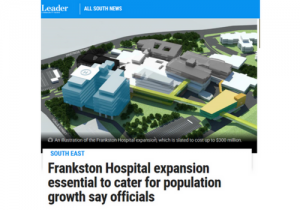 THE expansion of Frankston Hospital has the potential to create the state’s third health precinct, says Federal Health Minister Greg Hunt. Mr Hunt said the precinct, including a medical school, would drive economic growth and ultimately lead to the creation of new businesses in the area.

“My genuine belief is we will be able to deliver this,” he said. Mr Hunt made the comments at a lunch hosted by advocacy group, the Committee for Greater Frankston.

Peninsula Health’s new CEO Felicity Topp said the expansion was essential to cater for population growth in the region. Ms Topp said the works costing up to $300 million would help meet a population hike in the region of 40,000 people in the next 10 years. The planned works include 96 new hospital beds, 160 relocated beds from the old wards, 13 new emergency short stay beds, expanded maternity and paediatrics and two new operating theatres.

Ms Topp said both the increase in population and older residents would put the hospital under huge pressure. She said admissions at the hospital had increased by 15 per cent between 2014 and 2017. Frankston Hospital had the highest number of ambulance arrivals in the state, she added. “We want to be able to look after all those patients in a timely and caring way,” Ms Topp said.

The number of people with chronic diseases was expected to increase in the next decade, she said. Ms Topp said the planned teaching and research hub — jointly run by Monash University and Frankston Hospital — would feature a $15 million research centre of excellence with a focusing on ageing and chronic disease.

It would also enable the training of the next generation of health professionals, doctors, nurses and allied health workers, she said.

The expansion took a major step after Peninsula Health acquired the Frankston Tennis Club site, which is adjacent to Frankston Hospital. Peninsula Health will seek approval and funding from the State Government, with the aim of starting construction in 2019 and completing the build in 2021.