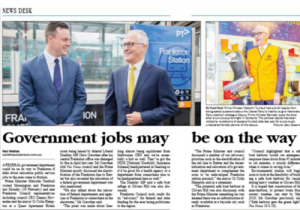 Government jobs may be on the way

A FEDERAL government department could be on its way to Frankston if talks about relocation of public services jobs to the area come to fruition.

Mr Crewther told The Times council and the Prime Minster mostly discussed the electrification of the Frankston Line to Baxter but also revealed the relocation of a federal government department was also mentioned.  “We also talked about the relocation of federal departments and agencies to Frankston or somewhere in the electorate.” Mr Crewther said. “The point was made about Geelong almost being the equivalent distance from Melbourne CBD and we are essentially a hub as well.  They’ve got the NDIS [National Disability Insurance Scheme] headquartered in Geelong so it’d be good for a health agency or a department from somewhere else to be headquartered here as well.”

FRANKSTON train station was a honeypot for politicians on both sides of the political spectrum last Monday (19 February). The Prime Minister Malcolm Turnbull turned up at the station about half an hour after Victorian Transport Minister Jacinta Allan dropped by to announce the awarding of a tender as part of the Labor state government’s $63 million station precinct redevelopment project.

“[Malcolm Turnbull] was at Frankston train station to talk about the Baxter electrification project and our support for that. We’ve signed off on that project already, so we’re waiting on the state government to tender it out.”

Ms Allan announced a construction partnership between KBR and John Holland to redevelop Frankston train station based on designs by Genton Architecture. “This new station will be bigger and better than before,” she said in a statement. “It will be a community centre Frankston can be proud of.”

Parking pain on the way

Early works on the $50m revamp start this month, with major construction and temporary station closures expected between early May and mid-June