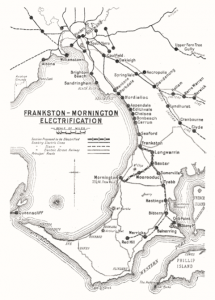 Map accompanying a 1929 Victorian parliamentary committee report that recommended electrifying the rail line from Frankston to Baxter and on to Mornington. Now, nearly 90 years later, there is a renewed push to extend the metropolitan line to Karingal, Langwarrin and Baxter.

EXTENDING the electric metropolitan train line from Frankston to Baxter has been a dream for more than 100 years.

It could have happened 90 years ago when a Victorian parliamentary committee said it should go ahead (at a cost of £92,500 – $185,000) but the Cabinet rejected the proposal. Subsequent calls for extension of the electric system fell on deaf ears especially with the rise of motor vehicles.
Now the project is firmly back on the agenda after the federal and Victorian governments late last year agreed to commission a business case using $4 million of federal funds.

As in the 1920s, many people support the project, including politicians, business people and members of the public.

The politicians include state and federal Liberal and Labor MPs. Business people include those represented by the 12-month old advocacy group Committee for Greater Frankston led by Fred Harrison of Ritchies supermarkets fame and former Frankston mayor Christine Richards.
Other supporters include students and staff at Monash University’s Peninsula campus in Frankston, and employees of Frankston Hospital. Frankston City Council is on board. So, too, are Frankston City traders, who see the extension to Langwarrin where there is room for a “park and ride” facility as a way to free up car parking around Frankston station.

What’s involved?
New tracks would be laid between Frankston and Baxter on what is now known as the Stony Point line. Baxter would become part of Melbourne’s electrified metropolitan rail network.
There would be three new stations: one would service Frankston Hospital and Monash’s Peninsula campus.
Fred Harrison said new stations would be built at Karingal and Langwarrin to connect two of Melbourne’s most car-dependent suburbs with metropolitan standard public transport.
(Langwarrin had a station on the Stony Point line between 1888 and 1981 when it was closed by the state government’s railway authority. It was on McClelland Drive opposite what is now Langwarrin Flora and Fauna Reserve, a military camp between 1886 and 1979.)
Karingal has a population of 13,527 people including 6144 workers. Langwarrin and Langwarrin South have 23,836 including 13,290 workers.

What are the benefits?
Committee for Greater Frankston chief executive Ginevra Hosking is among those making a strong case for extending the line.

A former strategist with one of the “big four” banks, Ms Hosking has been collating and generating research to support the business case.
The committee has advocated for the extension at briefings it organised with the state Minister for Public Transport, Jacinta Allan, and state Opposition Leader Matthew Guy. Premier Daniel Andrews is likely to attend a committee event mid-year when the extension as well as other projects for the region will be discussed.

Ms Hosking said Frankston needed its own public transport network. “Extending the line will create a backbone for improved services in the municipality and further afield,” she said.
“The Greater Frankston region has fewer than 28 local jobs per 100 residents so as well as creating new jobs, we need to better connect our workers with job markets outside our area.”
Extending the line to Langwarrin would enable a big increase in commuter car parking for travellers on the Frankston line on land near the old Langwarrin station without cutting into the Green Wedge.

“Instead of vying for limited parking in Frankston’s CBD, commuters could drive to Langwarrin and park all day without paying high fees currently charged in Frankston,” Ms Hosking said.  The park and ride facility at Langwarrin station, where there was plenty of vacant land, would be a key component and would provide multiple benefits.
It would free up commuter parking in Frankston’s CBD as well as attract new commuters from the Mornington Peninsula.  Many commuters currently using the car park at Frankston station – which holds just 416 vehicles and is full by 6.30am weekdays – would choose Langwarrin instead.  Statistics show more than 3000 people claim to access Frankston station by car each day. As many as 70 per cent of these travellers could be tempted to use new stations at Karingal and Langwarrin.

A flow-on effect would be removal of cars from crowded freeways. Getting people out of cars and on to an efficient train service would improve lives in many ways, Ms Hosking said.

Freeing up Frankston parking
Affordable, all-day car parking in Frankston CBD is occupied by train commuters, which means insufficient parking for CBD workers and shoppers.
CBD businesses have their growth limited by lack of parking. Shoppers can pay $12 a day.

Connecting the hospital and university
A new station servicing Frankston Hospital and Monash University’s Peninsula campus would be a game changer.
Many hospital staff, day patients and visitors would have easy access to the metropolitan train network for the first time. It would reduce pressure on limited, paid hospital parking.
A station near Monash’s campus would greatly enlarge the catchment area of Monash students who don’t have a car. It would also free up parking space at the campus.

Improving existing services to boost rail patronage
Extending the line to large populations at Karingal and Langwarrin (and neighbouring Langwarrin South) would reverse a disturbing trend – a decline in people using the rail line between Frankston and Aspendale.

Patronage on stations between Frankston and Aspendale is declining, against the trend at most other stations.

Usage from these stations has dropped 44 per cent in the past nine years while most other parts of the rail network have seen strong growth.
(In the case of other southeast lines Cranbourne and Pakenham, the state government has awarded a contract to build so-called High Capacity Metro Trains that will carry up to 2000 people with only 30-40 per cent seated to cope with growth. Melbourne’s current fleet of trains carry 900 people with about 66 per cent seated.)

“Inner city stations on the Frankston line are booming but patronage from outer stations is falling,” Ms Hosking said.
The decline was due to several factors including lack of and/or expensive commuter car parking, longer journey times on express trains due to timetable changes, and improved travel times on Mornington Peninsula Freeway (M11) and EastLink tollway (M3) for drivers who can avoid peak hours.

“Frankston to Melbourne via City Loop used to take about 55 minutes; now it’s at least 57 to 61 minutes direct to Finders Street or 53 minutes to Richmond and wait for a City Loop train, which adds more time,” she said.  “Stopping all stations trains, which go through City Loop, take at least 77 minutes. Unless you are going to Flinders Street station only, there’s no longer much time difference between express trains from Frankston and stopping all stations trains.
“The Frankston line used to work well for outer suburban trips because it had a viable express service. Recent timetable changes have improved stopping-all-stations services at the expense of express services.”

Fred Harrison said the federal government had signed off on the state government’s revised business case scope.  “The state government now needs to put the business case out to tender so we have options and costings before the state election,” he said.
“There’s movement at the station – it’s time for our community to get behind the proposed extension. It will radically transform public transport in our region, driving job creation, getting cars off crowded roads, freeing up crowded car parks, improving prosperity and making better use of public and private assets like Frankston Hospital and Monash University.”

1854: First Melbourne train – CBD to Port Melbourne.
1881: First “Frankston line” service – Caulfield to Mordialloc.
1882: Line extended to Frankston.
1888: Frankston to Baxter section (8km) opened, including a station at Langwarrin (closed 1981).
1889: Baxter to Mornington opened (September). Baxter to Stony Point opened (December).
1920s: First calls for Frankston–Baxter–Mornington line to be electrified.
1921: Stony Point line extended – Bittern to Red Hill (closed 1953).
1922: Electrification extended to Frankston.
1929: Victorian parliamentary committee recommends electrification of line from Frankston to Baxter and on to Mornington at a cost of 92,500 pounds ($185,000). Rejected by the Cabinet.
1981: Baxter to Mornington line closed (reopened as a heritage railway in 1991). Baxter to Stony Point retained.
2016: In lead-up to the federal election, both Labor and Liberal parties promise to fund a business case study into duplication and electrification of Frankston–Baxter line.
2017: September – Federal government announces study will go ahead.
2018: January – Federal government signs off on the state government’s revised business case scope.