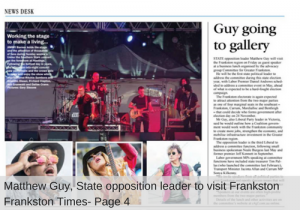 STATE Opposition Leader Matthew Guy will visit the Frankston region on Friday as guest speaker at a business lunch organised by the politically independent Committee for Greater Frankston.
He will be the first state political leader to address the committee during an election year, with Labor Premier Daniel Andrews scheduled to address a committee event in May, midway through what is expected to be a hard-fought election campaign.

Frankston electorate is again expected to attract attention from the two major parties as one of four marginal seats in the southeast –Frankston, Carrum, Mordialloc and Bentleigh – that could decide who forms government after election day on 24 November.

Mr Guy, also Liberal Party leader in Victoria, said he would outline how a Coalition government would work with the Frankston community to create more jobs, strengthen the local economy, and mobilise infrastructure investment in the Greater Frankston region.

Committee for Greater Frankston was formed last February to push for a better deal for the region from all three levels of government. It has lobbied for job creation, duplication of Lathams Rd in Carrum Downs Industrial Estate and extension of the Frankston rail line, and is supporting calls for a new specialist teaching hospital.
Before the lunch at McClelland Gallery in Langwarrin, Mr Guy together with the Opposition’s candidate for Frankston, police officer Michael Lamb, and Liberal MP for Hastings Neale Burgess will meet with the committee’s board, headed by president Fred Harrison, CEO of Ritchies supermarkets, to discuss local issues.

Committee for Greater Frankston CEO Ginevra Hosking said: “We invite speakers from all political parties to visit Frankston and openly discuss issues that will help advance our region. Speakers at our events are often high-profile members from the two major parties.”

Details of the lunch and other activities are on the committee’s website: c4gf.com.au