All aboard the train to progress 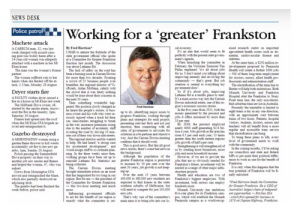 I HAD to admire the fortitude of the state government official who spoke at a Committee for Greater Frankston function last month. The discussion was about Lathams Rd.

The lack of safety on the road has been a burning issue in Carrum Downs for more than two decades. Fronting a crowd of 25 business people over breakfast, the regional director of VicRoads, Aidan McGann, calmly told the crowd that it was likely nothing would be done about their concerns in the next 10 years.

Then something wonderful happened. His position slowly changed as he heard the people’s stories: A business owner and his wife who were seriously injured when a truck hit their car; semi-trailers struggling to break in the wet; insurance premiums rising due to the number of accidents; staff avoiding the road by driving 10 minutes out of their way down side streets.

The regional director said he wanted to help. He had heard “a strong case for accelerated development”, and would assign staff to co-ordinate planning. In the three weeks since then, working groups have been set up to remodel Lathams Rd. Statistics are being collected.

The Carrum Downs meeting brought immediate action on an issue that has languished for too long in our region. But for me — the president of the Committee for Greater Frankston — this two-hour meeting said much more.

Influencing government officials to act for the benefit of our region is exactly what the committee is set-up to do: identifying major issues to progress Frankston; working through plans and strategies for each project; presenting relevant facts and not just emotion; then connecting with all sides of government to advocate for solutions in a bi-partisan and objective way. And the Carrum Downs meeting confirms that it should work.

This is good news. But like all good news stories, there’s some bad news in the background.

Although the population of the greater Frankston region is predicted to increase by 50 per cent over the next 30 years, job growth is not keeping up.

That’s why one of the committee’s main aims is to bring jobs into our local economy.

It’s an aim that would seem to fit perfectly with the present state government’s agenda.

When launching the committee in February, the Victorian Treasurer Tim Pallas explained “it’s all about jobs for us. I don’t mind you talking about improving amenity and involving the community — that’s great. But job creation is central to everything my government does”.

So if it’s about jobs, improving Lathams Rd is a terrific place to start. It’s a main access way into the Carrum Downs industrial estate, one of this region’s economic success stories.

In the five years from 2011, both the money generated by the precinct and jobs it offers increased by more than 33 per cent.

By 2016, the precinct employed nearly 6000 staff generating $2.8 billion a year. Jobs growth in the area has risen 6.5 per cent each year; 13 times greater than the south eastern regions jobs growth of half a per cent.

Strengthening it will strengthen all of us by creating more businesses, more jobs and more household income.

However, if we are to provide the jobs that are so obviously needed for Frankston’s future, investment will be needed in a range of other major infrastructure projects.

Health and education are two of Frankston’s biggest employers. With investment, both sectors can employ hundreds more.

Monash University has ambitious five-year plans for its Frankston campus, which will establish the Monash Peninsula campus as a world-recognised research centre on important age-related health issues such as dementia, cardiovascular disease and diabetes.

At the same time, a $250 million redevelopment proposed by Peninsula Health will create a further 1000 jobs – 500 of them long-term employment for doctors, nurses, allied health professionals and administration staff.

The electrification of the train line to Baxter will help both institutions. Both Monash University and Frankston Hospital abut the Frankston to Stony Point train line; the only non-electrified suburban train service in Australia.

Presently the timetable is limited to eight trains a day in any one direction, with an approximate wait between trains of two hours. Patients, hospital visitors, students, doctors, nurses and teachers will all benefit from a more regular and accessible train service that electrification can bring.

To bring these plans to life, every level of government needs to work with the community.

In the coming months, I’ll be asking our councillors and state and federal MPs to put aside their political differences to work as one for the benefit of Frankston.

It is only when this happens that the true potential of Frankston will be finally unlocked.

*Fred Harrison heads the Committee for Greater Frankston. He is CEO of Australia’s largest chain of independent supermarkets — Ritchies IGA – which first opened for business in 1870 on Nepean Highway, Frankston.